A gathering point for sports and events in a different perspective

by Claus Thomsen· January 19, 2020· in News· 0 comments tags: Drone, FIF ball court, Hillerød, Royal Stage
Standing alone in the dark, out in a swamp-like field, must be described as a bit over-enthusiastic and if you happened to pass by it, it would definitely be confirmed! ! Nevertheless, I had chosen this place as an ideal place to fly from in terms of photography itself and security. The goal was to capture the FIF ball court in the foreground, the center should be Frederiksborg Center and Royal Stage and the background should be Hillerød – in the head the composition of the picture was determined. The plan was relatively simple – fly up, photograph the object and land again … Unfortunately, this is a somewhat simplified version of what is actually happening. Photographing with a longer exposure while hanging in the air is also likely to mean blurring the image due to movements in the drone. The slightest wind or correction of the drone’s location can actually ruin the photograph – unfortunately this often happens, which is why it also requires more patience than that. However, the challenge with this image was slightly increased as the composition itself, as I imagined it, had to be adjusted while in the air. Suddenly, there was a parking space […] Read More 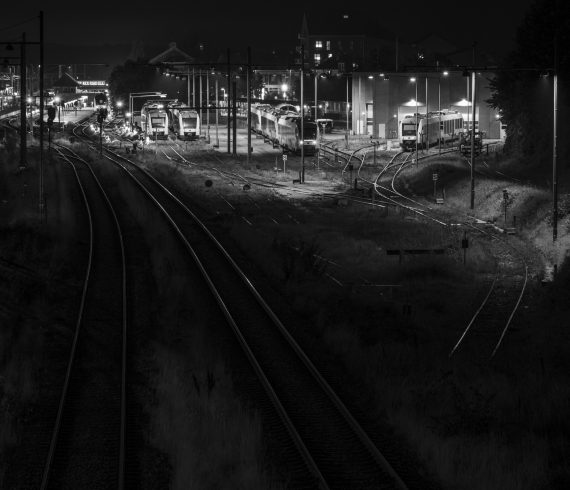 A trainstation in the night

by Claus Thomsen· September 11, 2019· in News· 0 comments tags: Hillerød, lowlight, Streetphotography, Trainstation
A trip into the dark is always exciting and if you like the slightly longer exposures and other natural challenges, it is also fun at the same time – I think so at least. Patience is a virtue I must admit that I can quickly become restless when it comes to my own ideas … often it means that I become impatient and after a relatively short time, I can hardly control it anymore. I just have to do-the-thing-with-my-camera no matter what! So I decided to go on a night out and look at the area and the opportunities that are now available – call it a test shot, a bad excuse to get off or just a new idea that flourishes on the original… The advantage of going out to these locations before the planned shot is to learn more about the area, the possibilities and not least the challenges that can arise in my composition (trains moves which gives lighttrails, people on the platform moving around, light from alternative light sources, wind and weather etc.). Metadata Read More