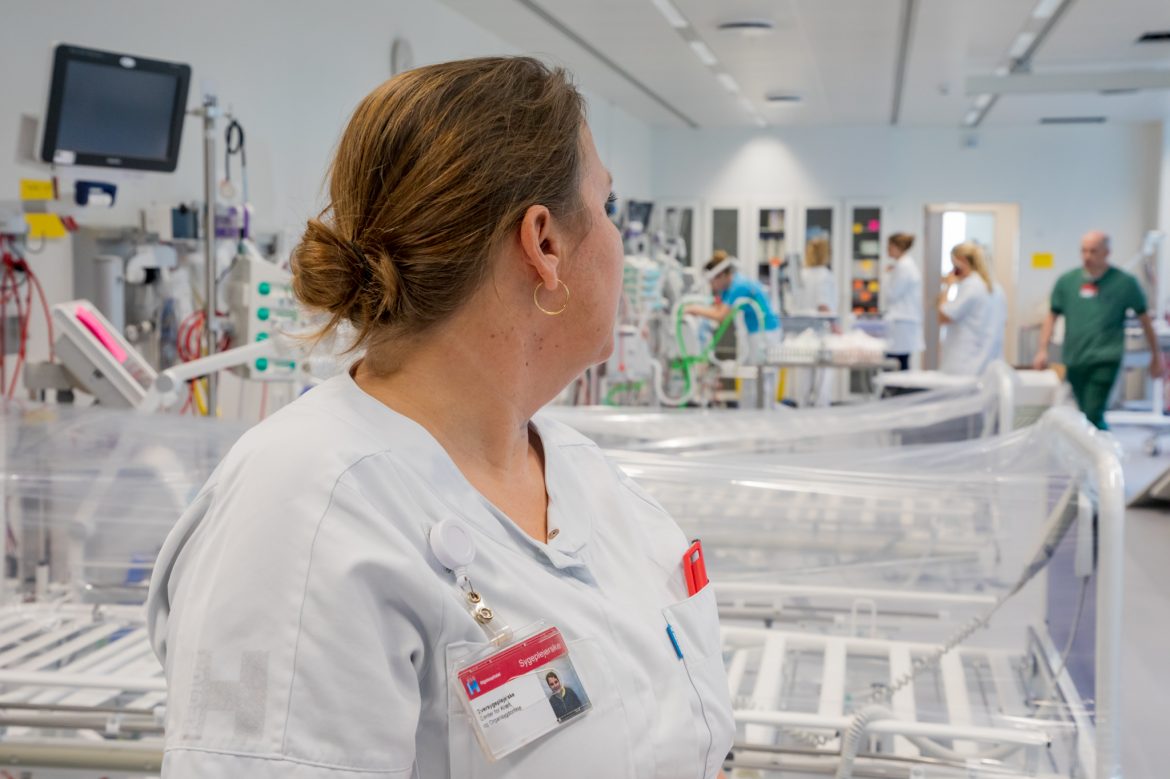 Last week I went to Denmark’s largest hospital, Rigshospitalet, as representative of the Capital Region, to produce press images for free use of all media. The task was definitely topical as COVID19 has hit us all either in the form of illness, social or work.

The reason we produce both images and films is partly because the hopsital does not want an army of journalists around the house and produces their own material with the danger of accidentally infecting the staff and patients and partly to ensure work peace for the employees to perform their duties in the best possible way.

I think it makes good sense and at the same time the press can start editing their content faster without having to spend time making similar images and stock footage.

Reflection on what we do in everyday life

When I finished the assignment, I couldn’t help but reflect on the assignment and not least the content of the pictures. This is probably best described as a work injury in most people when you begin to analyze one’s performance and not least the result of it, but that’s not how I look at it – I call it learning and improvement!

The day after, I chose to post on Linkedin, about this experience, as well as a desire for people to listen to the authorities and otherwise care for each other. Attached to the post was the image of the intensive care unit.

At the time of this posting, this post has circulated over 1300 views since it was published. Of course, I think it’s cool to be seen, but the intention was definitely not to be seen, but instead to be heard!

We all have a responsibility to each other! We also had that before COVID19, but sometimes it is the one thing that makes the connection that makes the big difference and in this case there was an effective voice tube via Linkedin.

The actual posting can be viewed on Linkedin via this link (Danish article): https://www.linkedin.com/posts/clatho_pressebilleder-rigshospitalet-covid19-activity-6649441100543119360-vH3S (the link opens a new window).

To produce press images under intense and sensitive conditions

Upon arrival, I had actually planned for an hour of preparation, where I would see the location, prepare the equipment and not least set my mindset in relation to the mood. That plan was quickly changed.

Upon arrival at the hospital, we were greeted by a very busy press officer who announced that everyone was very busy and that the schedule was pushed by an hour – in other words, we must start the task now! We were subsequently followed over to the new established building and were presented to the staff who should be helpful both in guiding us around and posing.

I ripped out my equipment and was close to being struck by the ‘photo-panic’ due to the situation, as I immediately noticed that the light was miserable and that 15-20 people were simply too many people in this location and that everything was similar to a scene from a disaster movie. Instead of stressing and adjusting the equipment (this is typically what you do when you panic, you can always press on your equipment or screw on your racks, etc.), I simply chose to breathe and get control of the situation … myself and my equipment and secondary all the other things in the room!

At the same time, I noticed that my colleague was running around with a camcorder on his shoulder and filming while a nurse looked nervously into the camera and told about the conditions – it seemed that he had activated his own panic button and was just running autopilot. .. it is here, fortunately, that experience comes into play.

When I had ‘set’ myself and found focus again, I started shooting. My plan initially was to produce some photographs with a wider angle. This is mainly due to the fact that I would like to create some general photographs that contain the space and its contents while avoiding too much involvement of the actors in the image.

I try my best to be ‘the fly on the wall’ and at the same time build confidence in me as a photographer with the actors.

Next, I start to interact with the actors. The way I do this is that I pick a person whom I then follow, and slowly begin to direct in the form of small phrases like “Can you just repeat that election?”, “Stand completely still, please!” or simply something as simple as “Can you tell me about your work? (while performing their actions)”.

Unfortunately, I find many photographers who do not remember their social skills in their efforts to capture the images. I make a great effort to acknowledge the people around me and not least to be polite and say thank you. It makes a huge difference to the mood and the individual’s experience and doing.

What equipment did I use for this task

In addition to the camera body (5D mark IV), I chose to work with a zoom lens (24-105, f/4). I had other lenses in my bag in the form of both prime and other zoom lenses, but this lens is super effective and, for me, a pure workhorse that provides flexibility in such locations as this one.

In addition, I had mounted an umbrella on a tripod where, with my speedlights, I illuminated the areas I needed to highlight. In the portrait photos of the doctor, I chose to use a softbox to give him a little more soft light than the rest of the room. In addition, for some pictures I had chosen to mount a flash on the camera – I primary rotated the speedlight so that it was shot with direction against a wall / ceiling and thus create a slightly more soft light – again only to highlight the person / equipment, etc.

Reflection – Did I Need Additional Equipment?

Did I need additional equipment ?! ALWAYS … Under the optimal conditions I had hoped for in the beginning, I would have liked to have full control over the light in the room and thus also the opportunity to create some study-like conditions. I was well aware that this was not possible, but as I said, it would be the ideal solution for me. I had hoped that I would have had time to reconnaissance the location and made some measurements before we started. By making these preparations before the actual photography, I can switch between the scenes faster as I do not constantly have to check if things are in the right way and thus focus 100% on the composition.

The result can be seen in the following – this is an excerpt of 12 out of 42 images in total. All pictures can be viewed via the Capital Region website at https://www.regionh.dk/presse-og-nyt/Pressefotos/Sider/Pressefotos-fra-coronapandemien.aspx (Opens in a new window).